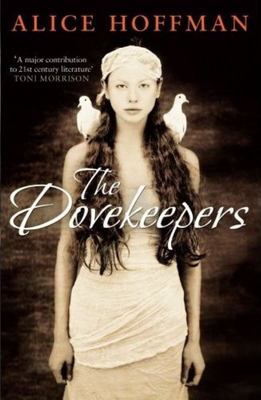 Over five years in the writing, Alice Hoffman's most ambitious and mesmerizing work ever, a triumph of imagination and research set in ancient Israel.

The author of such iconic bestsellers as Illumination Night, Practical Magic, Fortune's Daughter, and Oprah's Book Club selection Here on Earth, Alice Hoffman is one of the most popular and memorable writers of her generation. Now, in The Dovekeepers, Hoffman delivers her most masterful work yet--one that draws on her passion for mythology, magic, and archaeology and her inimitable understanding of women.

In 70 C.D., nine hundred Jews held out for months against armies of Romans on a mountain in the Judean desert, Masada. According to the ancient historian Josephus, two women and five children survived. Based on this tragic historical event, Hoffman weaves a spellbinding tale of four extraordinary, bold, resourceful, and sensuous women, each of whom comes to Masada by a different path. Yael's mother died in childbirth, and her father never forgave her for that death. Revka, a village baker's wife, watched the horrifically brutal murder of her daughter by Roman soldiers; she brings to Masada her twin grandsons, rendered mute by their own witness. Aziza is a warrior's daughter, raised as a boy, a fearless rider and expert marksman, who finds passion with another soldier. Shirah is wise in the ways of ancient magic and medicine, a woman with uncanny insight and power. The lives of these four complex and fiercely independent women intersect in the desperate days of the siege, as the Romans draw near. All are dovekeepers, and all are also keeping secrets--about who they are, where they come from, who fathered them, and whom they love.

This novel is Alice Hoffman's masterpiece.

Alice Hoffman wrote her first novel, Property Of, when she was 21. She has published a total of 28 works of fiction, including Practical Magic which was a major film starring Nicole Kidman and Sandra Bullock. Alice Hoffman now lives in Boston. Visit her website: www.alicehoffman.com